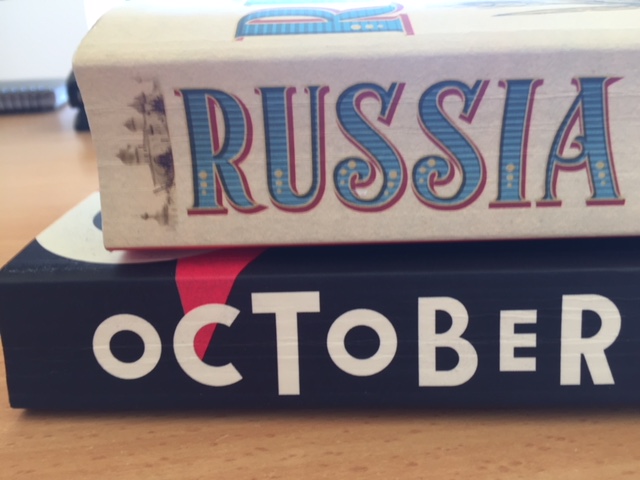 Delve into Russian history with these two books.

China Mieville October: The Story of the Russian Revolution (Verso 2017)

Russia: A 1,000-Year Chronicle of the Wild East

Martin Sixsmith’s chronicle begins with the Vikings and finishes with Putin taking us on a journey which is breathtakingly grand and conflicted.

He traces the history of the “turning points” where the story of Russia could have moved towards reform and liberal democracy or continued its autocratic trajectory. Russia’s history can be conceived as a long and tortuous conflict between the push and pull of European Russia exemplified in St Petersburg and Asiatic Russia of the eastern plains and the Mongols.

The book provides a riveting, and at times unbelievable, story – tragic, glorious, chaotic, complex. Everything, including the numbers of people who perish under various authoritarian leaders and even their foolishness, is on a grand, staggering and operatic scale.

A great, and intense, read!

October: The Story of the Russian Revolution

China Mieville’s history is the story of one year only, or rather part of one year: February to October 1917. Each chapter covers one month, with a forward on the prehistory of 1917 and an epilogue that describes very briefly the tragic consequences of the October revolution.  Mieville is a novelist and he knows how to make a story gripping.

Luckily for the reader, he includes a glossary of who’s who. I read this book with regular checks of the glossary and my own record of the names of various players and political groups with their often very long acronyms.  I had pink post-it notes with tags like Mensheviks, Bolsheviks, RSDWP (Russian Socialist Democratic Workers Party), MRC (Military Revolutionary Committee) and so on.

Mieville also has a glossary with a very brief biography of 54 characters who played a role in the revolution. Their deaths tell the story.

Not many lived to die from natural causes.

I was left with the impressions that the revolution was a process of endless meetings attended by hundreds of delegates, where decisions took hours to be made if they were actually made at all. People regularly shifted allegiances. Heroes one day were enemies the next. What it meant to be revolutionary was constantly evolving, waxing and waning. On a couple of occasions, while immersed in the story, I called out “No, no. Don’t do that, you fools”, as another opportunity for liberal democracy collapsed, and the tragedy of the ultimate revolution marched on.

The writer acknowledges that fleetingly there was a shift towards empowering peasants and workers, providing equal rights for men and women, introducing free and universal education, expanding literacy and cultural explosions. These were “snuffed out, reversed, became bleak jokes and memories all too soon”. Tragically, “it might have been otherwise”.

Can any book about Russia be anything but intense? I read this with another tome on the Russian Revolution beside me — Orlando Figes  A People’s Tragedy which also contains an amazing collection of photographs.

And if you want to read more, Mieville has an excellent annotated bibliography at the back of the book.